We Are Polk County’s #1 Healthcare IT Management Provider

This may sound like science fiction, but it’s not. The leading electronic health record vendors are, or will soon be, using Artificial Intelligence (AI) to read our EHRs. They revealed this at the 2018 HIMSS18 conference. 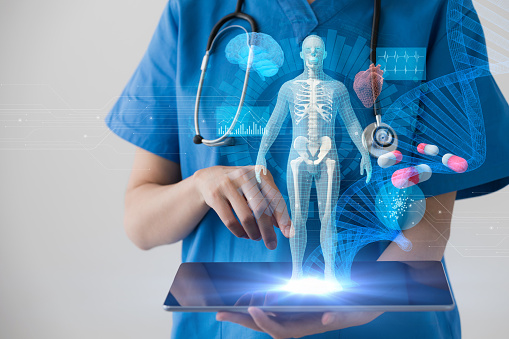 EHR vendors Allscripts, athenahealth, Cerner, eClinicalWorks, and Epic all plan to add AI into the next versions of their EHR platforms – some as early as 2019. AI will be incorporated into things like population health, telemedicine, voice interactions and even clinical decisions.

Dr. John Glasser from Cerner/Siemens tells us how this works:

“Right now, when [a physician goes] to order a prescription or you go to document, let’s say, on a patient, the machine — because you’ve got to document this, that or the other — … asks you the same questions, like if someone has diabetes regardless of the nature of the diabetes, and what’s been done before. So … you have the AI that says ‘I’m only going to document the stuff that is really tailored to this patient and their particular issues … and I’m going to populate with stuff I already know. I’m going to go ahead and take care of a bunch of the documentation and I’m going to focus [the physician’s] documentation on key items. That’s one way we do it. Really tailor … so they don’t waste time documenting stuff that’s irrelevant or that’s not going to be useful….

The second thing we have, and this is still early, … you’re in the room examining your patient, the machine is pulling data from the EHR … it’s looking at activities, what screen you go to as the doctor, it’s listening to the encounter, so it’s listening to the discussion and it’s pulling up key phrases and this, that and the other, and it’s watching the interaction. It’s actually seeing you listening to the patient’s chest or looking in the patient’s ear. But based on the system watching the conversation and listening to the conversation and pulling out the data it actually generates the documentation automatically. It’s still early, but it looks pretty darn promising … through recognition of voice and recognition of images and movement it will actually automatically generate this. Anyway … [with usability] it’s the fact that … if you can take time out of these kinds of things and reduce clicks, then we’ll have made progress with usability.”

Beyond EHRs – If AI can help a doctor save time and better serve their patients, isn’t this a good thing?

Saving time in the healthcare setting may mean the difference between life and death. AI can help a physician diagnose a condition and treat it promptly. An early diagnosis for a patient who suffers from a heart attack or stroke can be lifesaving.

With assistance from AI perhaps doctors will be able to spend more time with their patients. With an aging population that needs more time with doctors, extra time is a precious commodity.

Physicians have a never-ending pile of paperwork that often needs immediate attention. Today, most spend two-thirds of their time handling paperwork. This is up from one-third only 10 years ago.

A report from the Annals of Internal Medicine revealed that – “During the office day, physicians spent 27.0% of their total time on direct clinical face time with patients and 49.2% of their time on EHRs and desk work. While in the examination room with patients, physicians spent 52.9% of the time on direct clinical face time and 37.0% on EHR and desk work. The 21 physicians who completed after-hours diaries reported 1 to 2 hours of after-hours work each night, devoted mostly to EHR tasks.”

AI not only helps doctors save time, it also saves lives.

The treatment and prevention of dangerous diseases depend on early detection. And, a late or wrong diagnosis can have fatal consequences. AI research is being used to not only keep people healthy but to save lives as well. In 2017, doctors from Harvard and Beth Israel Deacon partnered with Philips to improve the diagnosis of cancer. Without AI, it could take 6 months to compile the data from 10,000 ultrasound reports. With Philips AI, physicians can retrieve the information from 200,000 ultrasound reports within 5 days.

Philips Research China, one of the company’s divisions specializing in AI, developed a Natural Language Processing (NLP) algorithm that extracts structured data from clinical reports, so doctors are provided with the proper information for secondary analysis. It’s currently being piloted in several large hospitals.

IBM is helping to fight cancer with AI, and its Watson Oncology platform. It will soon be used in a community hospital in Florida to help treat cancer patients. Watson takes in reams of clinical trial data and medical journal entries, detects patterns and gives cancer care specialists a list of effective treatment options.

Experts at the University of North Carolina School of Medicine tested Watson’s effectiveness with 1,000 cancer cases and found that it came up with the same recommended therapies as professional oncologists in 99% of the cases. Where this will really be of help is in smaller and rural medical centers where specialists are lacking.

AI helps doctors and patients in other ways.

Health assistants can also save you an unnecessary trip to the doctor, and time sitting in a waiting area with others who may have contagious illnesses. When you don’t feel well, you typically go to the doctor where he or she checks your vital signs, asks questions about your symptoms, and provides a prescription if warranted.

Now, a program called Your.MD can ask you about your symptoms and suggest steps you can take to help you feel better. It will also warn you if you need to visit a doctor. Other health assistants like Ada work in conjunction with Amazon Alexa to provide a symptom assessment report, and an option to contact a real doctor.

AI is also being used to remind patients to take their medicines. AiCure is another mobile app that uses AI to ensure patient compliance with prescriptions. This will help those who can’t remember to take their medications on time or those with serious illnesses who might skip their recommended doses altogether.

Will AI replace doctors one day?

As much as we like to think they won’t, it is a possibility according to authors Richard Susskind, chairman of the advisory board of the Oxford Internet Institute, in an article in the Harvard Business Review, and his son Daniel, an economics fellow at the University of Oxford’s Balliol College.

They believe that “AI will not only support physicians but ultimately replace them. The argument that technology cannot be empathic is moot, they argue, and many aspects of professional work do not require compassion. They argue that judgment, creativity, and empathy are not necessary to the practice of medicine”.

But have no fear. For the foreseeable future, AI will augment healthcare – not replace it.